Why The Nene Backlash? 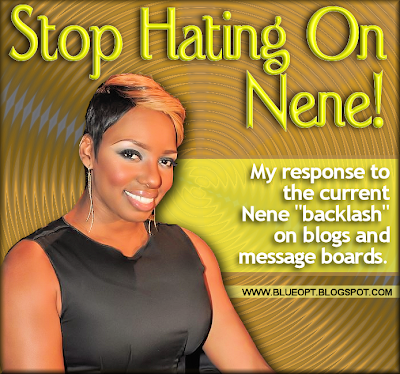 I’m a huge fan of The Real Housewives of Atlanta. Nene is the whole reason I watch the show. I think she’s the most relateable out of all the cast members and definitely the most likable. That’s why  I’m so shocked at the recent backlash that she’s been getting from recent press and from different internet blogs. People love to build celebrities up only to tear them down at the first sight of blood.  Nene is going through a rough period of transition, and it’s so very apparent that she’s still settling into this new phase in her life.  Everyone goes through periods like this.  The only difference is, she’s in the public eye, and every minor misstep is broadcast and picked apart by the world.  I have something I’d like everyone who has wrote mean nasty things about Nene to do.  Think about the hardest most trying period in your life.  Think about all the things you’ve said out of anger.  Think about all the fights you’ve had with your friends and the people you love.  Now think what if all of those things were broadcast on tv, talked about in interviews, discussed in magazines, wrote about in blogs, etc.  If you’re being totally honest with yourself, then I’m sure it’s not a pretty picture.  God knows I’ve said and done some horrible things over the 31 years I’ve been on this earth, and I can’t imagine how it would feel to offer all of those things up for public consumption.  Sure Nene chose to be on a reality tv show, but that does not mean she deserves the kind of nasty backlash that she’s been getting over the last few months.  Fame can be a double edge sword.  When the show first started, she saw the good side of fame and quickly became the “break-out star”.  People fell in love with Nene because she spoke her mind, she always kept it real, and she didn’t let ANYONE disrespect her or her family. Nene exuded this charming boisterous charismatic charm that made everyone want to watch her.  It was no secret that she was the star of “The Real Housewives of Atlanta” from day one.  Now that the show is a huge success and Nene has tons of other tv and film offers, the shows producers decided to portray a less “likeable” version of Nene this season (3).  It’s so very clear that this is a calculated power move by Bravo to try and regain control.  It’s a dirty tactic that is so very common in Hollywood.  But we need to remember there’s a REAL person with REAL feelings behind all the drama that surrounds Nene.  She projects such a strong willed “sure-of-herself” type personality, and I think people forget that she has feelings.  So they feel free to say horribly nasty things about her.  The anonymity provided by internet blogs and message boards have created and nurtured a whole sub-culture of callous disgusting awful insecure people that get off on destroying those who are successful (I call them “HOOPS” Hating On Other People’s Success).  There are waaaaaay too many “HOOPS” on the internet these days.  Nene is a beautiful strong talented intelligent kind-hearted honest and proud African-American woman.  When did everyone get so jaded?  When did everyone decide that honesty is a character flaw?  And when are we going to learn that negativity is just as toxic on the internet as it is in our everyday lives?  You may be able to hide your name on a comment post, but karma knows exactly who you are, and exactly where to find you.
My message to Mrs Nene is keep doing you, and your fans will continue to love you unconditionally.  Don’t let all the negativity get you down.  You’re destined for greatness beyond anything you can imagine.  RHOA is just a stepping stone.  All of the hardships are just preparing you for the next level.  Even-though you’re getting bad press right now, they are doing you a favor by keeping you in the public eye.  So let the haters hate… at least they know your name.

For more info on The Real Housewives of Atlanta, check out this fan site I created.  You can also post comments and view full episodes in our video section. http://www.sociallyurban.com/the_real_housewives_of_atlanta.html

5 Comments to Why The Nene Backlash?