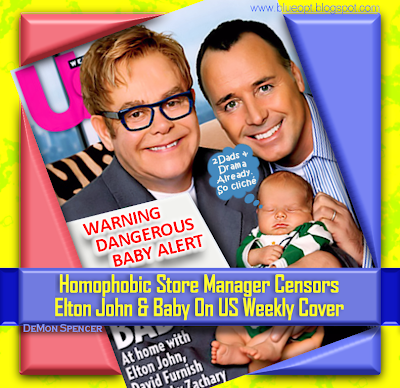 On January 18, 2011, Us Weekly debuted Elton John and partner David Furnish’s new baby, Zachary on the front cover. The happy singer talked about the birth of their son and said that they wouldn’t be spoiling him, but lavishing love on him.
Seems all well and good, right? That is, until I checked my Twitter feed and found this disturbing piece. Apparently there’s a grocery store in Arkansas called Harps, who is censoring the front cover of that particular issue of Us Weekly.
Jennifer Huddleston tweeted this message out to numerous people in the span of three hours, “This was taken at my local grocery store. I was shocked and horrified. Can you help bring attention to this? They are saying they need to keep children from seeing it, because it is a gay family.”

Following the outcry surrounding their decision to place a “Family Shield” over an Us Weekly cover featuring Elton John, his partner David Furnish, and their new baby boy Zachary, Harps Supermarket has issued a statement.

We have received a number of complaints regarding an incident in our Mountain Home store involving the current issue of US Weekly Magazine depicting Elton John, David Furnish and their newborn son. I would like to explain how this happened. For many years we have provided each of our stores with shields which can be used at the manager’s discretion to cover the front of magazines when they receive complaints from our customers regarding either the photo on the cover of the magazine or the titles of articles contained within the magazine. Sometimes those photos might be sexually provocative or too revealing. The magazine article titles might also be too suggestive for some customers.

Our true intention is not to offend anyone in our stores and this incident happened at just one of our 65 locations, which when brought to our attention, we reversed. 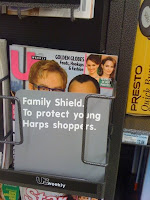 This “shield” comes from a place of ignorance, intolerance and hate.  An image of two loving parents thrilled to finally have a child of their own. This image should be praised not censored. It’s ashamed that the joy of new parents showing love and excitement about their new baby can be offensive to some people.