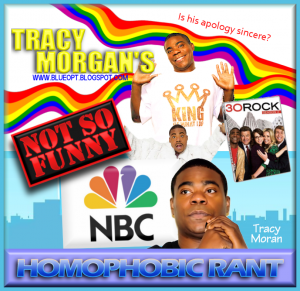 Comedian Tracy Morgan has come under fire lately because of some homophobic remarks he made during his live comedy show in Tennessee about a week ago. The first half of this blog is taken from a post written by a man named Kevin Rogers who was in attendance at the show and was deeply offended by Mr. Morgan’s hate speech. The second part of this blog is my response to all of this. And the last part is a small update on everything that has happened since this incident first began.

So tonight was the night, Tracy Morgan in the hallowed halls of the Ryman Auditorium.  The show was your typical hysterical dick, cum and pussy humor… I have to say it was hilarious and well worth at least 40% of the $86 we spent per ticket to see him. I figured at some point the gay jokes would fly and I’m well prepared for a good ribbing of straight gay humor.  I have very thick skin when it comes to humor; I can dish and I can take. What I can’t take is when Mr. Morgan took it upon himself to mention about how he feels all this gay shit was crazy and that women are a gift from God and that “Born this Way” is bullshit, gay is a choice, and the reason he knows this is exactly because “God don’t make no mistakes” (referring to God not making someone gay cause that would be a mistake).  He said that there is no way a woman could love and have sexual desire for another woman, that’s just a woman pretending because she hates a fucking man.  He took time to visit the bullshit of this bullying stuff and informed us that the gays needed to quit being pussies and not be whining about something as insignificant as bullying. He mentioned that gay was something kids learn from the media and programming, and that bullied kids should just bust some ass and beat those other little fuckers that bully them, not whine about it.  He said if his son that was gay he better come home and talk to him like a man and not [he mimicked a gay, high pitched voice] or he would pull out a knife and stab that little N (one word I refuse to use) to death. He mentioned that Barack Obama needed to man up and quit being all down with this just because he has a wife and two daughters. All of this being followed by thunderous cheer and “You go Tracys”.  Tracy then said he didn’t fucking care if he pissed off some gays, because if they can take a fucking dick up their ass… they can take a fucking joke.  The sad thing is that none of this rant was a joke.  His entire demeanor changed during that portion of the night.  He was truly filled with some hate towards us.

Kevin Rogers story was SHOCKING to me.  Out of all the stories I read about this incident, none of them actually quoted anything that Tracy Morgan said.  So because of this, I felt like maybe it was something small that got blown up by the press.  But after reading this, I do not see how any journalist could write an honest and truthful piece about this without letting the reader know exactly what was said.  His actual words were far beyond anything I had imagined.  This has totally changed my opinion of Tracy Morgan.  I was fan, but now I’ll never watch or listen to anything he puts out ever again.  What he said can’t be brushed over with an apology.  His apology means nothing to me because I know it will only be about him trying to save his career.  He’s a sad little hate filled man, and I hope people will see him for what he is and stop supporting anything that he is a part of.  Why would anyone want to support someone like this?  I hope that gay rights organizations are not trying to solicit any kind of public apology from him.  It would be insulting.  Someone that says the kind of things he said doesn’t change the way they think overnight, or go to some weekend siminar and magically become a changed man.  That kind of ignorance and hatred comes from a very deep dark and disturbed place, and any proclamations of change should be met with extreme skepticism.  As long as he’s on 30 Rock, I’ll NEVER watch that show EVER again.  The sad part of it all was the reaction Tracy got from the audience.  A large majority of them were cheering him on during his homophobic rant.  To me that’s a confirmation of the long and treacherous road ahead we have yet to travel to reach total equality for our community.

Morgan has agreed to go to Nashville with GLAAD to protest the state’s controversial “Don’t Say Gay” bill, according to E! Online. He spoke to E!’s Marc Malkin about his regrets over his rant, emphasizing his belief that all children should be loved, regardless of sexuality.  “I know how bad bullying can hurt,” Morgan said. “I was bullied when I was a kid. I’m sorry for what I said. I didn’t mean it. I never want to use my comedy to hurt anyone. My family knew what it was like to feel different. My brother was disabled and I lost my father to AIDS in 1987…. Parents should support and love their kids no matter what. Gay people deserve the same right to be happy in this country as everyone else. Our laws should support that.”  In an interview with Russell Simmons at Global Grind, Morgan apologized again for his verbal tirade that sparked national outrage, swore off his hate speech and came out for marriage equality.  “Of all the sicknesses, there is probably none more abusive than homophobia. My heart is committed to giving everyone the same rights that I deserve for myself,” Morgan said. “I don’t care if you love the same sex as long as you have the ability to love someone I am deeply sorry for the comments I made. What I am most sad about is the comments I made about kids and bullying.”

Morgan also noted his support for gays serving in the military — an issue solved by the recent repeal of “Don’t Ask, Don’t Tell,” and then insisted he believed in gay marriage, too. “I believe everyone deserves the right to be happy and marry who they want too; gay, white, black, male or female. Let me know where the rally’s at Russ. I’m there!” Morgan promised.  The words came as he works to make amends, not only with his public, but his friends, too. Tina Fey, his “30 Rock” co-star and executive producer slammed his comments but noted that she believed Morgan was a loving person.  “It doesn’t line up with the Tracy Morgan I know, who is not a hateful man and is generally much too sleepy and self-centered to ever hurt another person,” Fey said in a statement.  Another co-star, Cheyenne Jackson, said that he was “disgusted” by what Morgan had said.

Was Tracy’s apology sincere?  Is he serious about making amends?  Does he understand how hurtful and dangerous his gay bashing tirade was?  I wish I had the answer to those questions, but only time will tell. When I began to write this blog, I kept thinking about something Mya Angelou said in an interview with Oprah.  It seemed to fit this situation perfectly, and I’ve found it to be true in my life as well.  This very wise woman said “When someone shows you who they are, believe them”.JULY 4 2011 UPDATE