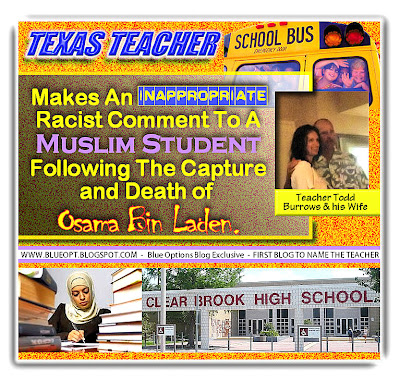 A Houston Algebra teacher at Clear Brook High school (Mr Todd Burrows) mocked a 9th grade Muslim student by telling her “I heard about about your uncle” after Bin Laden’s death.  The student’s mom says she was offended by what her daughter says happened Monday in ninth grade algebra.  She said, “The teacher told the student that ‘I bet you’re grieving.’ And she basically looked at him and said what are you talking about? And he said I heard about your uncle’s death and she said wow, because she understood that he was referring to Osama Bin Laden being killed.”
I came across this story while checking my email messages.  The headline that I saw read: “Teacher Mocks Muslim Student: “I Heard About Your Uncle”.  When I first read that headline, I have to admit I did giggle a little.   Although it was a quick visceral reaction, it was still wrong of me to find humor amidst the racist torment that this Muslim student must have felt.  All through elementary and junior high school I was the only Black kid in most of my classes, and I have gone through similar situations with racist teachers as well as racist classmates.  Because of this, I can definitely  relate to this young female student.  You would think I would be the last person to find humor in something like this, and I am just as confused as you are by my initial reaction.   I guess I have some “issues” of my own to work out… but I will say that I think this teacher should be fired ASAP.  Kids go through so much these days and the last thing they need to worry about is ignorant teachers alienating minority students by making racist comments in front of their classmates.  Some kids look up to their teachers, so when a comment like this is made, it sends a signal to those impressionable minds that this kind of behavior is acceptable.  When an educator displays this type of poor judgement, punishing them with “administrative leave” does not go far enough.  They need to be fired and made to attend some kind of racial tolerance class before they can even apply for another teaching job.
I think it’s great that the girl’s classmates stood up for her.  It gives me hope for their generation.  I think this teacher could learn a thing or two from these students… it’s called CHARACTER (and that’s something he clearly does not possess).
FYI – The school would not release the name of the teacher to the press, so I had to do a little detective work to find out who he was.  It was not an easy task but I didn’t give up.  I thought it was wrong to protect this man’s identity.  I was even able to locate a picture of him and his wife.  I know the quality isn’t very good, but it was the only one I could find.  I hope this incident will make Mr Todd Burrows take a long hard look at himself, and want to become a better person.  Everyone makes mistakes and I believe redemption can be achieved by anyone that’s willing to admit their shortcomings and work diligently to overcome them.