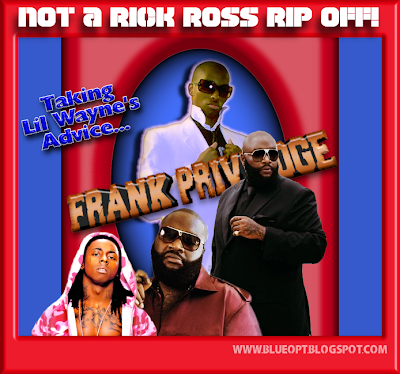 Lil Wayne always says that he doesn’t listen to anyone’s music besides himself. I use to think that was crazy and a bit self-absorbed, but now I think I understand why. I had this epiphany just this morning. Here’s what happened: Last night I couldn’t sleep, so I got out my recording equipment and decided to work on some new material. It seemed like everything was falling in place very quickly. I didn’t have to struggle to find a concept. I knew what beat I wanted to use. Wrote the first song in about 10 to 15 minutes. Breezed through recording the lead vocals & backing vocals. Things were going so well, so I decided to take advantage of the momentum and record another song. Within 2 or 3 hours I had finished 2 whole totally new songs… and I really liked both of them. After everything was done, I went to sleep for a couple of hours. When I woke up I immediately listened to the new tracks. I couldn’t believe what I was hearing. Both of them sounded like a Rick Ross rip off, or a very bad Rick Ross impersonation. I’m a HUGE fan of his, & for the past month he’s all I’ve been listening to, so I guess that’s how his style & flow crept into my music without me even knowing. Crazy right? I don’t know why I didn’t hear it when I was recording the songs. You gotta understand that hip hop is my passion. Not just the music, but the whole culture. I can’t imagine what I’d do without hip hop. Yeah, I’m an artist, but I’m also a fan. I love that feeling I get whenever I hear something new that’s hot. I love it when I recognize “game changers” before anyone else does (Juvenile 400 degrees album with “Ha” as the first single, or Lil’ Kim’s 1st album “Hardcore”, or the first time I heard Biggie on the Craig Mack “Flavor In Your Ear” remix, Lil’ Wayne’s first major hit “Lollipop”, Master P’s “Ghetto Dope” album, T-Pain’s reintroduction of autotune on “In Love With A Stripper”, Dr. Dre’s “The Chronic” album, Puffy’s in-house production team “The Hit Men”, JaRule introduced the whole “rapper and singer” style with a little bit of pop mixed in to ensure crossover appeal, Lil Jon created a whole new sub-genre of hip hop called “Crunk”, etc. etc. you know what I mean). I love turning friends on to a new artist that I know is about to blow up. But if I plan to be successful in this business, then I have to dial back the “hip hop fan” aspect and turn up the “hip hop artist” in me. Easier said than done, I’m sure. I know I don’t have to stop listening to other artist I like, but I think if I keep my musical influences broad and listen to more of a cross section, rather than focusing in on just one artist (like Rick Ross), then I can prevent this from happening again… I hope.


To check out my music, or if you just want more info about Frank Privlidge, please visit the sites below:
www.reverbnation.com/privlidge
www.demonspencer.com