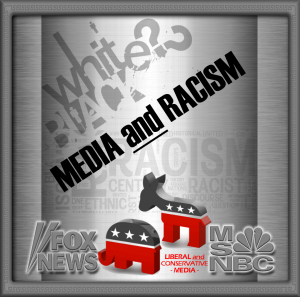 When I started writing a blog post sharing my thoughts on the racist Donald Sterling recordings I came to the same realization as ESPN columnist Bomani Jones but he said it much better than I, so I’ve posted his video at the end of this blog.

But before you watch the video I’d like to share an observation of mine that Mr Jones didn’t cover in his commentary. It’s about the way the liberal media and right wing media uses these public episodes of racism to reaffirm what they already believe and assure their audience that they are the good guys, while collectively missing the point altogether.  This happens every time an incident of outright racism shows up in the news.  Last week we had the racist rancher Cliven Bundy, and this week we have the racist billionaire Donald Sterling.  I noticed a pattern in the way liberal media covers issues of racism and then noticed some similarities in conservative media coverage on race. MSNBC and other liberal leaning media covered it more as a teaching moment to show how racism still exist (which is the way it should be covered). But liberal media also uses racial situations like both of these stories as “feel good” moments for their white liberal audience. They get to give themselves a big pat on the back for being outraged by racism. It’s a way for them to tap into the satisfaction of political activism without having to do anything.  It’s an opportunity to reaffirm beliefs and let everyone know how great a person they are for caring about minorities.  Of course there’s nothing wrong with that, so I’m not bashing them for this… but I am saying there’s a need for more depth after the self congratulatory pats on the back are done, and the sensationalism of the story fades away.

Then there’s the conservative media’s take on stories of racism. Just like liberal media coverage conservative media used the collective condemnation of said racial remarks as a “feel good” reaffirmation of their beliefs, and gave their audience a pat on the back for being outraged by racism. But that’s where the similarities end. After the pats on the back, conservative media takes a big right turn.  To understand what I’m about to share with you may require a suspension of disbelief.  Here’s what I mean.  Bundy and Sterling’s acknowledged racism for conservative media proved that racism does not exist in modern America.  This denial of logic takes leaps of mental gymnastics that only makes sense to the conditioned brain of the far far right.  Fox News and the rest of conservative media comes to the same conclusion every time blatant racism is in the news.  First they strongly condemn the racist, which is commendable I guess, but in the very next breath they use the same incident of racism they just acknowledged and condemned, to prove that racism does not exist.  It’s amazing, remarkable, astonishing and a spectacle that every liberal should see at least once before dying (#LiberalBucketList).  This logic defying feat of using the existence of something to prove that the very thing you just acknowledged does not exist is mind boggling to me… but they do it every single time.  Both Sean Hannity and Bill O’Riley agreed that since a majority of American’s spoke out against Bundy and Sterling’s racist remarks, then that proves that America has moved beyond the acceptance of racism.  And that proves that all racism and racist will meet the same rebuke received by Bundy and Sterling.  I know this does not make any sense to anyone on the outside of the right-wing bubble, but this way of thinking is logical to them.  Liberals go for the easy pat on the back while ignoring the burden of institutionalized racism that occurs everyday and hinders the advancement of minorities into the middle class.  While conservatives go for the all out “racism is dead” celebration fiesta.  When it comes to issues of race in this country, neither side of the ideological divide deserves praise.

Bomani Jones calls into the Dan LeBatard radio show and gives the REALEST take on the Donald Sterling drama, and how we all are ignoring the real issue when it comes to racism and how we handle situations of real racism in America and American media. It starts out with a funny observation but keep listening because he shares some pretty serious incite on institutionalized racism and how imbalanced everyone’s outrage is over Donald Sterling’s privately expressed racial faux pas to Donald Sterling’s proven blaten housing discrimination. Everything Bomani says is on point and noticeably missing from mainstream media coverage.