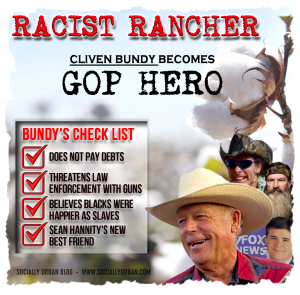 Conservative media and the GOP crowned their newest hero over this past week, and his name is Cliven Bundy.  Mr Bundy is a Nevada rancher who had a very tense armed standoff with government officials trying to collect money he rightfully owed to the US government for 20 years worth of grazing fees that he refused to pay.  Fox News and every single conservative media outlet rushed to Mr Bundy’s side very quickly because they saw an opportunity to exploit the situation and feed it to their base as big bad Obama government persecuting a hard working man who’s done nothing wrong.  Casting Mr Bundy as a “maker” instead of a “taker”… which is ironic because Mr Bundy is so obviously a “taker” but I’ll explain that a little later in my post.  First let’s go over the facts about the situation and the man at the center of it.

1.  Mr. Bundy has been grazing his cattle on government owned land for 20 years without paying the proper fees that ALL ranchers have to pay.  Accumulating for the past 20 years these fees add up to approximately $1 million.  When normal American’s duck taxes and refuse to pay their bills, they get liens, repossessions, court judgments, and property seized.  If a bank repossess someone’s home and the occupant refuses to leave, the bank will show up with an armed Sheriff and they will drag you out and arrest you for not complying.

2. Instead of handling this tax/fee dispute in court, Mr Bundy goes on Fox News and makes a call for armed anti-government militia men to come to his ranch with their guns to help him in an armed confrontation with the Bureau of Land Management so he can continue to steal from the government with no consequences.

3.  When the government officials from the Bureau of Land Management came to seise Mr Bundy’s cattle for the 20 years of nonpayment and trespassing on government owned land they were met with heavily armed militiamen who watched Fox News and listened to Sean Hannity’s and Mr Bundy’s call for assistance.  They had snipers pointing sniper rifles directly at law enforcement.  Everyone who came to Bundy’s ranch had guns pointing at law enforcement… and here’s the unbelievable part, NO ONE GOT ARRESTED.  Not one person was put in handcuffs.

4.  Mr Bundy makes easily confirmable lies in numerous interviews but all of conservative media decided to ignore these warning signs that this man is dishonest and is misrepresenting himself and his situation.  One of the biggest lies was about how long his family owned the ranch.  He told Fox and all the others that his family has been on that land since the 1800’s, when county records clearly state that his family only purchased the land sometime in the 1980’s.

5.  Mr Bundy says in an interview that he doesn’t recognize the authority of the United States government.  Then he holds a victory rally and brings a state sheriff on stage to berate him for 20 minutes while the crowd cheers him on.  He tells the sheriff and every other county sheriff in the country that they need to “disarm government bureaucrats” and if they couldn’t do the job then the citizens need to take-up arms against them just like he did.  This was his third public on air call to violence… armed violence against law enforcement.  The sheriff on stage listened to all of this and did nothing.

After going over the 5 factual points I’ve made, please tell me how anyone could see this man as a hero.  Everything he’s done is supposed to be the stuff that conservatives are against.  He doesn’t pay his debts.  He does not follow the law.  He shows contempt for law enforcement.  He lies very easily.  He wants the government to provide free grazing land for his cattle. He makes anti-American statements and says he does not consider himself as part of America.  All of this and somehow conservative media loved this man. Can you imagine if a black man went on television calling for armed assistance to settle a dispute with the government?  If a group of black men pointed guns and sniper rifles at law enforcement?  Everyone knows exactly what would happen if Bundy was black.

Then Mr Bundy does an interview with The New York Times and decides to share his views on “the Negro”.  I won’t paraphrase because you need to read his entire statement:

“I want to tell you one more thing I know about the Negro. I recall driving past a public-housing project in North Las Vegas, and in front of that government house the door was usually open and the older people and the kids — and there is always at least a half a dozen people sitting on the porch — they didn’t have nothing to do.  They didn’t have nothing for their kids to do.  They didn’t have nothing for their young girls to do.  And because they were basically on government subsidy, so now what do they do?  They abort their young children, they put their young men in jail, because they never learned how to pick cotton.  And I’ve often wondered, are they better off as slaves, picking cotton and having a family life and doing things, or are they better off under government subsidy? They didn’t get no more freedom.  They got less freedom.”  –  Cliven Bundy **video of him saying all of this is at the bottom of this page**

Yes, that was a direct quote.  Mr Bundy’s comments are not only uninformed and blatantly racist… they are horrible, they are vile, they are disgusting, they are ignorant, moronic, vulgar, crass, imbecilic, dumb, idiotic and completely indefensible.  What sane person with a working brain wonders if “the negro” was happier being a slave?  Who thinks like that?  And he has the nerve to talk about black people being on government assistance when he’s been receiving government subsidized grazing fees for 20 years and even with the huge government subsidies that only charges him 25% of the fair market price for grazing cattle, he can’t even pay that.  I almost can’t blame him for thinking that black people are all on welfare, all living in government housing, all from single parent homes, all unemployed or in jail.  He believes this because Fox News, conservative pundits, conservative media, Tea Party & GOP legislators are constantly pushing those false racist views.  That’s why they have embraced people like Bundy over and over again.  Remember Ted Nugent? He’s the no talent has-been “rockstar” that the Tea Party and conservative media embrased even after making racist and violent comments about the president.  He called President Obama a “subhuman mongrel” in an interview.  After Nugent learned that Obama won the election he said “Pimps whores & welfare brats & their soulless supporters have a president to destroy America.”  Nugent told a CNN reporter that either Americans can vote Obama out of office or he can suck on my machine gun.  Even after making these idiotic comments and violent threats republican congressman Steve Stockman invited Ted to attend the President’s State of the Union address as his guest.  Ted even campaigned for Texas GOP gubernatorial candidate Greg Abbott.  You are the company you keep.

Remember the Duck Dynasty guy?  Phil Robertson made some really stupid racist remarks in an interview saying that black people were happy and singing picking cotton during segregation until the government came along with civil rights and gave all blacks welfare.  After making those blatantly racist comments conservative media, the Tea Party, and the GOP all rallied around him and he became their hero.  Again, you are the company you keep.

Remember George Zimmerman?  He shoots and kills an unarmed teen after racially profiling him.  Fox and conservative media rallied around Zimmerman… especially Hannity.  A man that killed an unarmed teen became a hero to them.  Then after the trial was over and he got acquitted Fox and conservative media was shocked and surprised when Zimmerman’s ex wife had to call 911 because he threatened her and her dad with a loaded gun.  Since the Trayvon trial Mr Zimmerman has had 4 different incidents with law enforcement.  Again, you are the company you keep.

I’m pointing out Ted Nugent, George Zimmerman, and Phil Robertson because it’s becoming a pattern for conservatives to hero worship these racist assholes.  When it happens over and over again you can’t ignore it or say those are coincidental isolated incidents.  The racism has become a very visible part of the conservative movement.  Cliven Bundy is just the latest in a series that will keep repeating itself.  Next month I’ll be blogging about the new conservative hero that turns out to be racist and all of conservative media will be shocked and surprised again… and again… and again.  It’s sad that this keeps happening in 2014.  I have friends who are republican and I know this kind of racialized politics makes them sick.  I’m sure there are other republicans who are just like them but their party has been hijacked by the extremist and co opted by a huge billion dollar money making conservative media machine.  Hannity, Limbaugh, and Beck are destroying the credibility and electability of real conservative legislators who do not agree with the nuts, but feel they have to go along with it to stay in office.  That’s good news for democrats, but bad news for anyone trying to legislate and govern.  Conservative media keeps talking about a “post-racial” America, while proving over and over again we are far far from it.