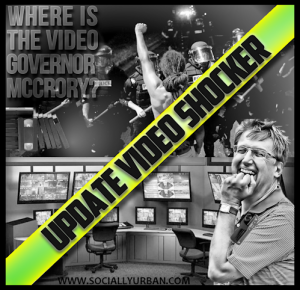 In my previous blog post titled “Where’s The Video Gov McCrory” I had to do a bit of guess work to figure out what my state governor plans to do with police dash cam and body cam video when there’s a community disputing accounts given by police officers who were involved in a “use of force” incident where a suspect got hurt or ended up dead. Governor McCrory signed a bill into law that blocks the release of police video to the public. It’s like the governor missed the entire point which is more transparency in order to rebuild broken trust between the police and African American communities. Obviously Governor McCrory must have something different in mind for those videos so I pondered the possibilities in my blog post. Here’s that section if you need a refresher:

I’m not sure why they even bother wasting money on body cams in my state when the public can’t even view the footage. The body cams weren’t going to end these wrongful deaths but they were supposed to bring a sense of accountability so the community could start to build trust with law enforcement. So I ask myself what is our governor doing with these videos? Maybe McCrory and his fellow republican lawmakers collect these videos to show them when they have movie night at the governor’s mansion… eating popcorn and laughing at African Americans

getting stopped by police for no reason, getting stripped searched on the side of a highway as cars slow down to witness the indignity, watching a man get chocked to death by police on a sidewalk while pleading for his life telling them over and over that he can not breath. Watching an 8 year old African American child playing alone in a park get shot by police before he could even see what was coming. Watching an unarmed African American teenager walking away from police then getting shot in the back. Then that same officer walks over to the teen’s lifeless body and decides to unload the rest of his clip into the already dead teen as the young man’s body heaved and convulsed after each shot hit him. I bet Governor McCrory and those far right extremist he tries so hard to impress would get a huge laugh at all of that kind of stuff.
“Taken from “Where’s The Video Gov McCrory””

Of course I was being facetious and over the top but I thought it was necessary to shock the reader, shake their conscience and make them see and understand how painful these issues are for my community. But it turns out my movie night at the governor’s mansion scenario may not be as far from the truth as I thought. Watch this part of Governor McCrory’s press conference from yesterday. The video is about 45 minutes long so you’ll need to skip ahead to 21:30 and listen for 2 or 3 minutes.

Governor McCrory was asked by a reporter about the sometimes limited capabilities of video painting an incomplete account of what happened in shootings like Keith Lamont Scott’s.

The governor’s answer to that question:
“You’ve got to be extremely careful about how and when to release information… I watched a football game last week on TV and watched four different replays and each showed something different. You know, camera angles and everything mean a lot and there are a lot other circumstances involved in other situations. It’s not just the camera that’s involved in an incident, there are many other factors involved and it would be inappropriate to comment on those factors.”

EXPAND TEXT - Click here to read what the governor said in the video.
Hide Quote

Yes, you just watched North Carolina Governor Pat McCrory compare the video that shows an officer taking the life of Keith Scott to watching a football game. The analogy is morbid and craven but it goes way beyond words. It’s his caviler attitude devoid of any emotion or sympathy for the family and the community who are all still grieving and demanding answers. The governor’s attitude and approach is a prime example of why we have to say “Black Lives Matter”. After watching this clip it’s clear to me that the governor hasn’t decided if he believes black lives should matter in the state of North Carolina … but we can say definitively that Keith Scott’s life didn’t matter much to McCrory at all. His performance at this press conference communicates that perfectly.

So I was wrong about movie night but I was pretty close. Instead of movie night (like I suggested in my original post), they have game night. I wonder which part of the Keith Scott video did the governor and his republican legislative attendees pause and rewind for an instant replay? Maybe he’ll address that at the next press conference.