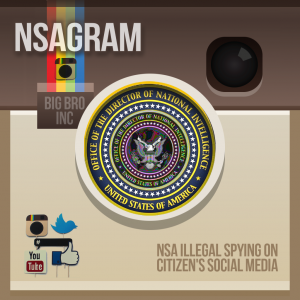 Secret courts, sealed indictments, private rulings, redacted records, no oversight. I know it sounds like I’m describing a country in the middle east, but sadly I’m not. I’m talking about the land of the free and the home of the brave… good old USA. How did our beloved country come to spy on millions of it’s own citizens? PBS’s Frontline gives us the inside story of our government’s massive and controversial secret surveillance program and the lengths they went to try to keep it hidden from the public. This 2 part story is very compelling and should be viewed by ALL Americans because we can’t let politicians and billionaire insiders decide what our rights are, who they apply to, and when it’s ok to violate them. That is not the same America who’s constitution and bill of rights are envied and admired the world over. My eyes were opened after watching this so I feel it’s my duty as an American to shine a light on it for those who aren’t aware of this issue and for those who aren’t sure what the facts are because most media outlets are doing such a crappy job covering it.

Amazing reporting by Frontline and PBS. Whenever someone in congress gets up to make a speech about cutting PBS’s budget or completely doing away with PBS altogether, we should send them a copy of this program. The New York Times holding back that story when they had a chance to lift the veil on major ongoing crimes committed by President Bush and his administration. That decision represents the failure of corporate media. How many other stories have major news entities held back over the years? Snowden was right to choose Greenwald (even though I disagree with some of Greenwald’s methods). Who knows what would have happened if he would have chosen Fox or NBC or The Wall Street Journal.

I voted for President Obama in 2008 and 2012. I think he’s done a good job as president overall but his promises of transparency, his decision to continue the illegal NSA surveillance, lack of oversight on the US drone program, and his administration’s treatment of whistleblowers are areas that I feel very troubled by. It’s extremely disappointing to say the least. If republicans would go after him for those things, I really couldn’t blame them. Those are very legitimate areas to criticize… but for some reason they go after him for fake scandals like Benghazi, and the IRS, and Fast and Furious. How about 40 more votes for the repeal of Obamacare, or one more investigation on Benghazi after 7 have already been done, or let’s call Lois Learner to appear before Issa’s committee to invoke the 5th again just in time to make the 6:00 news. All of that seems much more important than this little NSA illegally tapping American phone calls and monitoring our email and web traffic. Maybe they live in glass houses when it comes to allowing the NSA to run these types of programs. Who the heck knows why politicians do what they do?

Republicans chasing phony scandals and the president not following through on his campaign promise of transparency injects mistrust and breeds even more cynicism when it comes to our expectations of what politicians can get done. We as citizens can break that cycle if we stop treating political parties like sports teams to root for rain or shine. Politicians know this and that’s how they get away with making horrible decisions and it’s how congress gets away with 6 years of complete inaction. If I’m a republican who supports sensible gun control and I see the president giving some push-back on republicans who are against gun control, I feel like I need to defend and root for my home team even though I agree with the president. So all of a sudden I’m no longer for sensible gun control. I’ve seen democrats do the exact same thing. To make our government work for us and not against us, we need to stop treating politics like a sport. It’s the only way we can start holding our elected officials accountable again. Let the tv pundits and political analyst do the home team rooting shtick. Someone has to be the adult and change our “them vs us” mentality. Now I’ll step down from my soapbox. If you know people who need to see this news report please pass along this blog address.  All of us at Socially Urban would greatly appreciate your help in reaching those who are thought to be unreachable.

United States of Secrets the official FRONTLINE PBS site to watch the report. If the youtube videos above aren’t working use this link to watch the program..