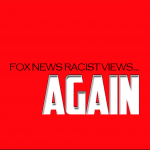 If anyone is curious why I despise Fox News and everything they represent, the video clip below is a perfect example that explains why. You have 4 people pretending to have an intelligent debate on terrorism and policing in the wake of the recent terrorist attack in France, but if you listen to the overall theme of this phony debate you’ll see that it’s really another opportunity for Fox to make their viewers afraid of black and brown people. They try to make racism sound reasonable, to desensitize us all from that sick feeling we get when we realize we’re taking part in or doing something or saying something that we know is wrong. When we lock our car doors when we see a young black man approaching thinking he’s a criminal who might rob me. When we see a black mother and her kids in the grocery store with a cart full of food and think she’s probably paying with food stamps. When we see a Muslim man boarding our flight and hope that he was stopped for extra screening. Fox News and their guests are constantly telling their viewers that it’s not only ok to make racist assumptions, but those racist assumptions are most likely true. This ignorant moronic woman suggest that skin tone is an indicator of criminal behavior, or as she put it an indicator of who’s a “bad guy”. The man beside her takes this even further and connects the terrorist attack in France to the way policing is done in New York. He suggest that targeting black and Latino men, ignoring their rights as Americans, and policing ethnic neighborhoods with military style police armed with military style weapons will somehow prevent terrorism and make us all safer. Then another ignorant panelist adds something very telling. She says people like her will not be targeted so in her mind it makes it all ok. This was the only truthful utterance in this pathetic racist discussion. Everyone on that panel knows that their race would exclude them from the dangers and dehumanization of racial stereotyping and racial profiling. Even the African American female panelist would be excluded due to her gender.

This video encapsulates everything that’s wrong with Fox in 4 short minutes. After watching it a few times, I feel it’s necessary to challenge or break down some of the ridiculousness and speak directly to each problematic statement:

2. Stop and Frisk in New York had absolutely nothing to do with the decrease in crime there. Every study that has been conducted to answer that question has shown that targeting people based on race is a waste of police time and resources and it has a negative effect on the relationship between minority communities and police. Stop and Frisk was an unconstitutional failure that should never be repeated anywhere.

3. The male panelist said he never felt like police looked at him as “the enemy”. Of course they didn’t because his race wasn’t targeted. That’s why it’s called racial profiling. Stop and Frisk made NYPD look at blacks and Latino’s as “the enemy”. NYPD officers were told that if they assume everyone they stopped potentially had a concealed weapon, that would make the encounter legal. So black and latino men weren’t looked at as law abiding citizens anymore, under Stop and Frisk they were all looked at as potential criminals.

4. NO ONE IN THE UNITED STATES IS BEING HUNTED BY ISIS. That ludicrous assertion needs no debunking or rebuttal from me.

5. The best way to be safe is arming everyone with guns. This is probably the most irresponsible piece of the Fox News ideology. First they convince their viewers that young black and brown males are dangerous, deserves to be targeted by police, and are most likely criminals; then after they are convinced of this they tell them all to go out and buy guns to protect themselves from the black and brown men who are out to get them. This is the kind of reporting that leads to unarmed men of color being shot and killed because the shooter perceived them as a threat, only later realizing that they posed no threat at all. Crime continues to drop in this country but when polled most Americans believe crime is at an all time high. That misconception is mostly due to media who use fear to sell products. Unfortunately that misconception is also costing lives.

6. If a terrorist sees a heavily armed police officer they might decide to call off their planned attack. This kind of thinking is almost laughable. The truth is if a terrorist is determined to attack Americans and take lives, there really isn’t a lot we can do to prevent this. Human’s aren’t perfect and neither is our government and law enforcement. For every 10 attacks that they prevent, there’s always going to be 1 or 2 that gets by them. That’s why I believe looking at the reasons that lead someone to become a terrorist and trying to address those issues in a realistic rational way would be much more effective than waging wars and stockpiling weapons and passing concealed carry laws that encourages citizens to be suspicious of those who do not look like them, and adopt the role of a vigil anti justice crusader.

7. The NYPD being exemplary in blending in with the citizenry and becoming part of the population without being the enemy? This statement is only true if you’re a white New Yorker which makes up about 33% of the city’s population. For the rest of the non white citizens this statement is not true, and even more so for the black citizens who make up 25% of the population. Choking an unarmed man to death on a sidewalk, forcing a man to strip naked while people on the street watch, or anally raping a man with a plunger is not what I would call an exemplary police force. But this panel at Fox if fine with all of that just as long as their white privilege protects them from it.

At the end of this video clip the panel talks about the bravery of those who worked for the French satirical newspaper Charlie Hebdo. I’m in total agreement with them on that, but “brave” is a word that becomes meaningless when it comes out of a Fox News anchor’s mouth. There is no bravery in ignoring the suffering of those who aren’t a part of your perceived “good guy” skin tone or race, and there’s certainly nothing brave about profiting from manufactured fear. Fox News and those who subscribe to their ideology are cowards. Racist predictable cowards. Charlie Hebdo’s cutting edge commentary that spared no one’s sacred cow is the antithesis of Fox News and their crusade against African American culture and the minority community.

Here’s a link to an older post that also points out Fox for their racist ideology. ttp://sociallyurban.com/video/how-fox-news-views-race/.