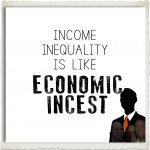 It’s really fairly pretty simple stuff. Also, if wage laws discourage low pay, then businesses innovate more rapidly and productivity increases. Decades ago the Scandinavians grasped this relationship, and since then, those countries have become some of the richest on earth. In short, economics is analogous to human’s blood sugar levels. There’s a healthy range. Within that range, lower is better but too low can be dangerous as well and zero puts you in the morgue with a toe tag as your only accouterment. When inequality rises, the symptoms aren’t necessarily immediate but they are just a deadly. It may not notice it until your brain—or the economy–panics; credit booms feel great. But rising inequality is a sign of a crisis on the horizon. Ignore it at your own, as well as those directly affected, peril. We saw this dynamic in 1930, in 2000 and again in 2008. You can’t eliminate inequality, and we don’t want to. But it should be kept within the “safe” range for everyone’s benefit. The Role of Minimum Wages on the Overall Economy I’ve established that on one hand, we want the lure of large rewards to help drive innovation through investment and entrepreneurial enticement. On the other hand, we need a stable and secure middle class. Are they mutually exclusive or can we have our pie and eat it too? Would raising the minimum hourly wage — let’s say to $12– threaten innovation? Of course it wouldn’t. More money in the middle class means more goods being purchased and less government assistance for those out of work. Neither would a more generous Social Security system, easier terms on student loans or a vigorous public jobs program. Quite the opposite has been proven time and time again. The lure of big rewards isn’t diminished by having to pay a little more in taxes. Realistically, it’s as significant as a gnat on a boar’s butt. Another key, though, is that innovation’s big rewards not fund family empires. The second and third generations never replicate the genius  of the first(see Wal-Mart’s stark deterioration after the passing of Sam Walton). Instead, the descendants go into politics, or become speculators or tax evaders. An effective estate-and-gift tax works to prevent this. With a high rate and a generous exemption or even a full deduction for qualified altruism, those who have won great fortunes will give most of them away to promote themselves or their cause de jeur. We can stomach inequality, in other words, as long as we meet two conditions.

In a democracy, no one should rule by inherited wealth — or it’s really not a democracy at all is it?.  – Harvey Gold

The Will Of The People 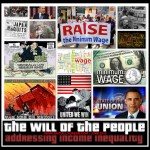 When President Barack Obama won reelection in 2012, he made a number of promises that captivated progressives and made us all hopeful once again. We all knew these were very big ideas and would not come easy at all, but when the President has the will of the people on his side and a crumbling economic structure where only a few benefit, then of course these factors would make things much easier. Ideas like gun control, marriage equality, income equality, immigration reform, health care reform etc. Under any other circumstances I’d be crazy or embarrassingly naive to think we’d get anywhere with such a lofty progressive agenda. But the more I think about it, all of those things should be easy. They should be a given really. Think about it… mandatory enhanced background checks for all gun purchases is supported by 90% of the American people. Marriage equality is supported by 60% (and rising more every day). An increase in minimum wage has 80% support. Immigration reform has the support of 55% favoring a legal pathway to citizenship. Sixty percent of the American people either fully support Obamacare (aka The Affordable Care Act) or think the bill isn’t liberal enough (those who still favor the public option which was dropped from the bill to get it through the house). Every one of those lofty progressive ideas that the President spoke about in his speech has support from a majority of the American people. Something is wrong here. Something is definitely wrong here. We’re supposed to live in a democracy where the president and elected officials are chosen by the people to carry out the wishes of the people. So if you have a situation where a majority of the people overwhelmingly support something, but that something still does not come to pass, we need to ask ourselves why the hell not. This is a question I’ve been struggling to make sense of for quite some time. How can you have the will of the people support something, and a majority of the senate support something and still it does not come to pass?

I’m a lover of politics but ultimately I’m a lover of information. I love history and science and finding out how things work. I love reading obscure historic biographies and watching every history channel special about past wars and presidents. As I began to write this blog I remembered something about World War II that helped me understand how elected officials can completely ignore the will of the people over and over again and still remain in office. I know it sounds crazy right now but let me explain. During WWII Japanese Emperor Hirohito and his military generals devised a propaganda campaign of massive proportion. They relentlessly drilled into the minds of their civilian and non civilian population that the Americans were complete savages. Every single day they were told stories of the Americans coming into villages raping women, decapitating babies, dismembering kids, drinking the blood of the people they kill after torturing them, and whatever else the regime’s sick sadistic minds could make up that would put the fear of god in them. They did this because it made their army fight till the death and it made the Emperor look like a protector. But one very unintended consequence of this type of propaganda says a lot about human nature and how what was intended to strengthen through manipulation can end up weakening and leading to a huge downfall. Ok, so the Japanese people heard and believed all these horrible stories about Americans and American soldiers. When our army finally reached the shores of Japan and started to make their way through the villages, they were not there to harm civilians. We knew about the Japanese propaganda so we printed up thousands of pamphlets in Japanese telling them that our soldiers were not there to kill or hurt them and if they surrendered peacefully no harm would come to them. But of course they did not believe us. They were bombarded with horror stories about us for two straight years so to them an American soldier was the devil incarnate. When it became clear that they were losing the war and they saw US soldiers coming to their village, the parents would slit the throats of their children and then slit their own. To them this was the only way of saving their children from the devil. They’d rather die by their own hand so they could make it quick and relatively painless than be tortured, dismembered, decapitated, raped, etc. Village after village the same thing happened over an over no matter what the soldiers tried to do to let them know we meant them no harm.

This small piece of WWII history helped me understand why the will of the people can be ignored time and time again without an all out revolt. We’re Japanese villagers. We’ve been conditioned. We’re fearful and therefore powerless. The president wants to raise the minimum wage and has the complete support of the people. Every working person in this country can agree that a person working a full time job should not be in poverty. But that’s the way it is right now. Full time job working everyday of the week and still does not make enough to feed their family. Wall Street seeing a huge upswing, major corporations making record profits, CEO’s getting millions in bonuses and instead of using all those profits and bonuses to pay the people who work for them a fair wage, they use it to buy politicians, to lobby the people we put in office so they can keep their huge profits and keep paying their workers shit. These lobbyist get political pundits and “so called” journalist to tell the electorate that a raise in minimum wage would kill jobs. And people are so afraid of losing their low paying crappy job that they start to believe the propaganda. Never mind that what these so called experts and pundits are saying does not make sense. A company making record profits can’t afford to pay their workers a living wage? If that’s true they should go out of business. If they are that close to the edge then that’s not a healthy company. We need to stop separating ourselves into republicans or democrats, or white or black, or native or immigrant… those are really just labels that help the fear machine push out more and more lies and more and more propaganda. We have the numbers, we are the majority, we have the power so it’s about time we start acting like it. We’ve all seen the gap in income disparity grow larger and larger and yet we’ve done absolutely nothing NOTHING to fix it. Our president wants to raise the minimum wage. The American people want to raise the minimum wage. Why isn’t it happening? Are we going to take responsibility and support this until it’s law or are we going to be like Japanese villagers in WWII waiting to slit our throats to avoid an even worse fate?

The next time someone tells you that raising the minimum wage would kill jobs and slow the economic recovery, here are some hard facts that proves those statements to be false.

Among the 50 largest low‐wage employers:

These facts and figures were researched by the National Employment Law Project (PDF).  They killed a very old Republican talking point that low wage jobs were the heart of small businesses.  This study found that the majority of America’s lowest‐paid workers are employed by large corporations, not small businesses, and most of the largest low‐wage employers have recovered from the recession and are in a strong financial position.