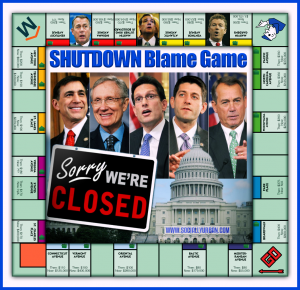 As some of you may know, I love a good facebook debate about politics. I have a smart and very diverse group of friends in terms of race, ideology, and political affiliation. I didn’t know how rare that was until I read a Reuters poll a few months ago that revealed 40 percent of white Americans and 25 percent of non-white Americans are surrounded exclusively by friends of their own race.  If you’re one of those people whose social circle lacks diversity, I implore you to critically examine your life and the circumstances (conscious or subconscious) that led you to have such a limited view when choosing your friends.  I know you’re asking what the hell does any of this have to do with the government shutdown.  Well let me explain.  This morning I posted something on facebook about Senate majority leader Harry Reid’s cunning political prowess which is evident in how he’s dealing with the less cunning republicans lead by Ted Cruz (yes Ted Cruz, not John Boehner.  That’s not a typo).  My best friend Shante’s boyfriend Doug read my facebook post and left a comment.  We have differing views on who and what caused the government shutdown so of course a lively facebook debate ensued.  If you read the full debate you’ll see why it’s important to have friends who aren’t exactly like you because they may help you see something from a different perspective that you wouldn’t have otherwise.  I think I kinda sorta got Doug to admit I was right about who caused the shutdown but I did understand why he thought there was a problem with exemptions.  Anyway, here’s the debate (my comments are in red):

Me:  Harry Reid is giving them hell. He’s so soft spoken and unassuming. Many new Senate Republicans underestimate him. Big BIG mistake.  lol

Doug: They are all corrupt! The gov shutdown is because the senate refuses to remove a 72 percent subsidy for federal employees and exemption from health care for themselves. At the same time the GOP is making backdoor deals to exempt themselves also. They are all liars n covering there own self interest at the public’s expense.

Me:  We could argue the “they are all corrupt” trope a thousand times over but the real reason we’re at a shutdown is because House Republicans have tried to pass through legislative back channels an anti-Obamacare provision that they have failed to move either through House votes the 41 times they’ve attempted to repeal the ACA (Obamacare), through the Supreme Court, which upheld the law’s constitutionality, or through the election of 2012 when Mitt Romney advocated defunding Obamacare over and over and lost. It’s a law, and by attaching its defunding to a budget, the GOP is sidelining the legislative process. The 72 percent subsidy wasn’t even brought up until the day of the shutdown. Before that they were asking for a full repeal of the law. And when they saw that wasn’t going to happen they changed their demand to a 1 year delay plus a laundry list of other demands they failed to pass legislatively. I’m all for assigning blame equally when it’s due but this government shutdown is purely the fault of the far right tea party republicans.

Doug:  Partially correct! Yes they have tried to defund. Yes its law. We agree! Yet, against the law itself the administration has changed it 12 times giving perks to whoever speaks the loudest. The final bill sent by house only ask, why are all these groups being exempted if we are mandated. Those changes were added after the supreme court ruled. How can anyone defend a lawmaker imposing a law on us that does not apply to them. Its in the details. This law wasn’t even about healthcare. That was the bait to get the vote. Its the single largest shift in power to the executive branch in history. Its a bad bill but suits the need at the moment. It was lies! U cant keep ur doc( or wont be able to in three years) and its not cheap and affordable. Thats not republican or democrat. Thats just whats happening. Very few that can be trusted on either side. I appreciate your opinion though. You very informed which most people arent.

Me:  We switched from arguing the cause of the shutdown to the merits of the arguments of the reason the shutdown happened. So I’ll take that to mean you agree that the Senate is not the cause afterall . I understand your concerns with the ACA and I also understand why you think there are problems with exemptions. But I think it’s too soon to make leaps and assumptions. If the law is horrible and does everything opponents are predicting then it will die under it’s own weight. But those who are actively working to undermine it (tea party republicans) just because they do not like the man in the white house is wrong.

I want to say a big thank you to Doug for helping me post something new this week.  I wanted to post something about the shutdown and the Affordable Care Act but just hadn’t took the time to write it yet. So again, thanks Doug. 🙂

*All blog graphics are created by me and can be found at http://sociallyurban.com/graphics/