The screenshots below were taken from a message board debate about the Illuminati and which celebrities were a part of it.  As most of you probably already know from reading previous blogs I’ve written on this subject I do not believe that all successful black American entertainers are all members of a secret society who worships the devil. But that wasn’t the issue that brought me into this particular debate.  What did draw me in and convinced me to leave a comment was a statement by one of the commenters that said the 81 year old comedian Joan Rivers was murdered by the Illuminati because she exposed First Lady of the United States Michelle Obama as a transsexual.  I couldn’t believe a rational thinking adult would believe something this ridiculous so I had to find out why they believed this and where they got this information that convinced them this was true.  After reading the entire conversation below you’ll see how hard it was just to get him to answer that simple question.  I can almost guarantee that after you read his answer you’ll be shaking your head and laughing at the same time.

*some of the sequencing can be a little confusing because our responses to each other sometimes posted simultaneously. I know it looks like a lot to read but I promise it’s worth it. 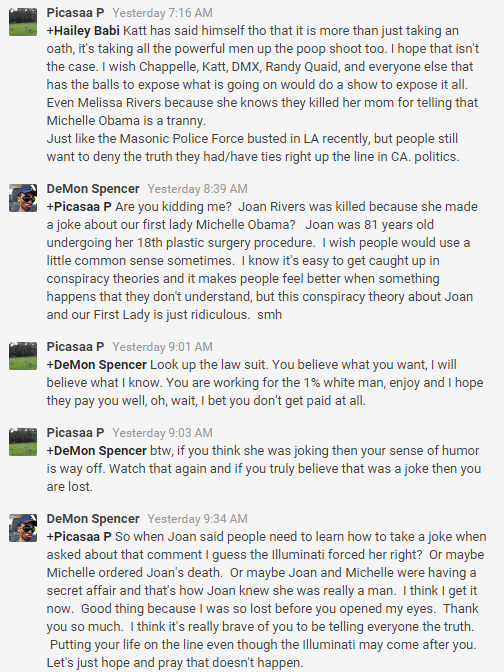 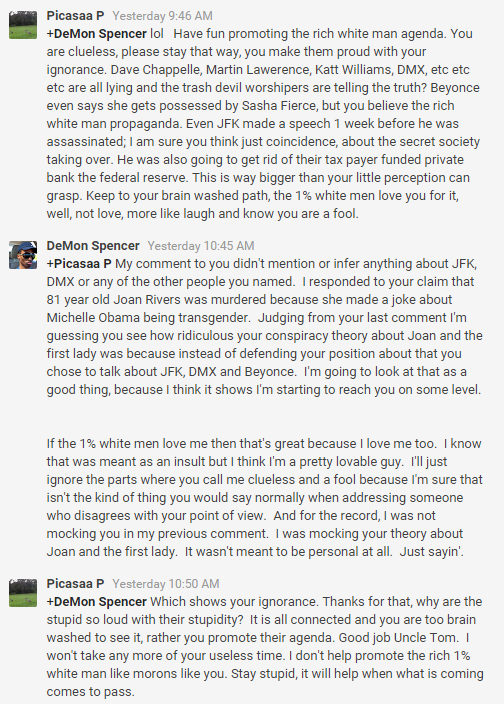 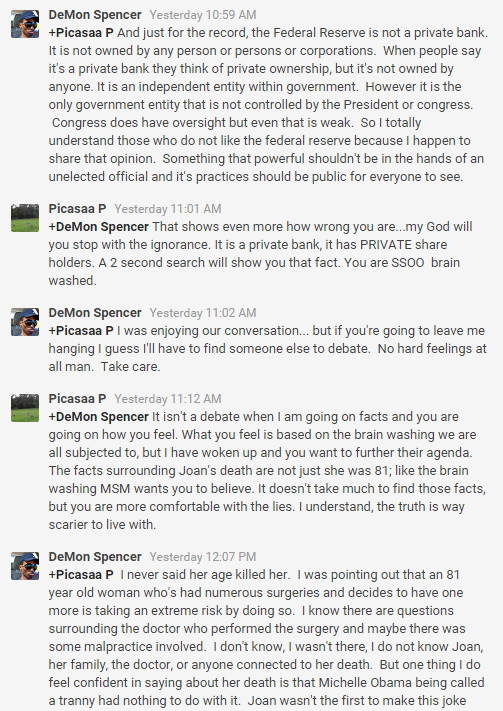 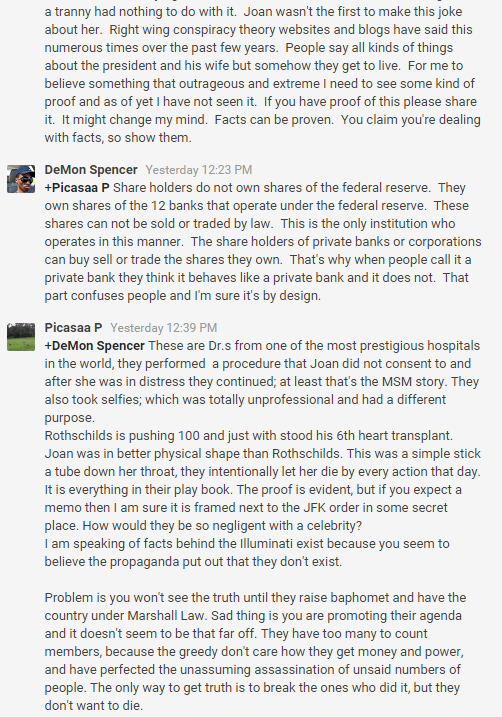 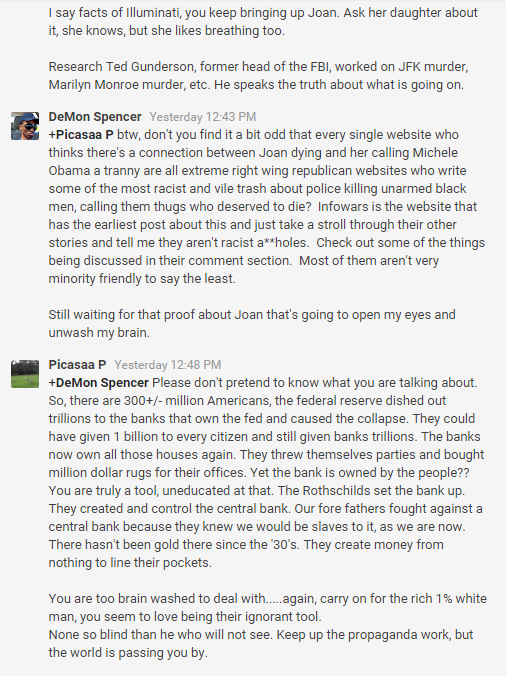 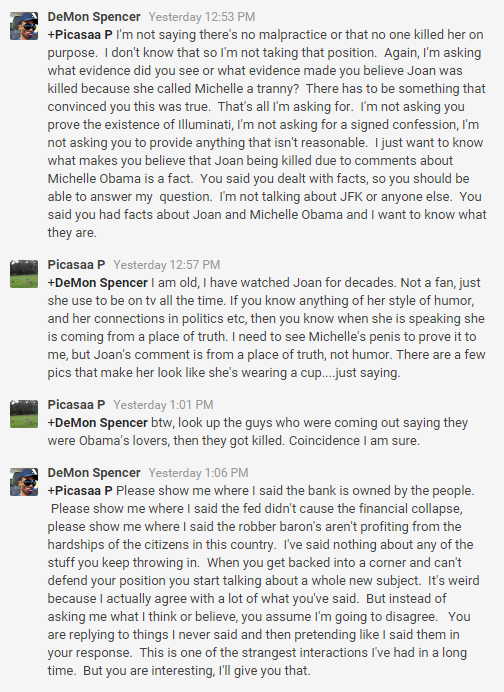 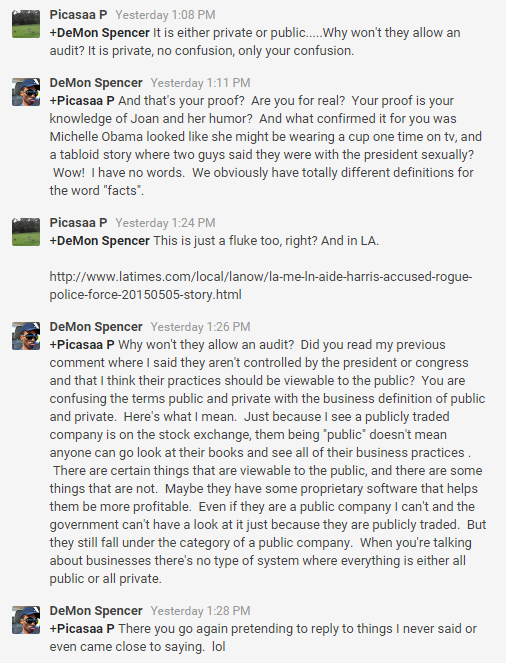 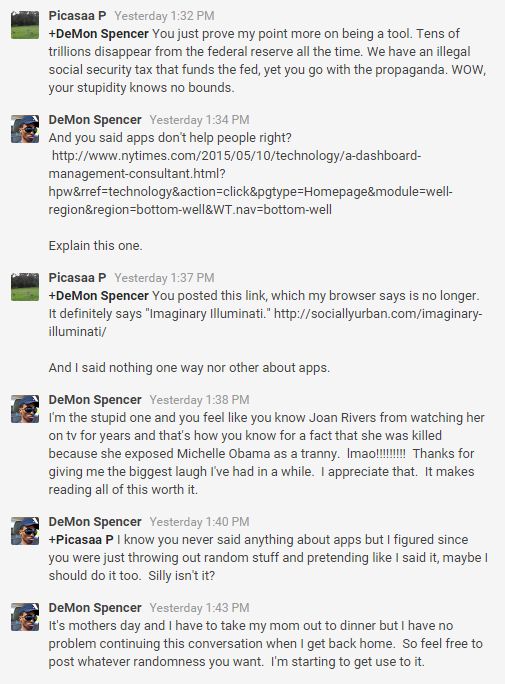 I’m missing the last 2 comments he posted but I can paraphrase him so you’ll get the gist of it. Basically he accused me of being a troll and told me I was crazy and had psychological issues and suggested I seek help for mental health issues. My response:

In his last comment he restated his belief that I was a troll and told me he believed that my twitter account, my facebook account, my pictures and profiles, and my blog were all created to fake my identity so I could troll without being looked at as a troll. Then he told me not to post a reply to his last comment and If I did try to respond he would block me. My response: 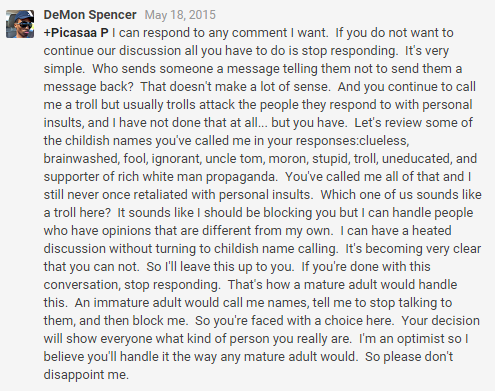 Unfortunately he decided to take the immature route. He deleted all of his posts and responses from our conversation/debate, and blocked me. I could care less if someone blocks me but it does bother me when people try to run away from a discussion when someone challenges them to defend their statements and beliefs. I think it’s so easy now for people to surround themselves with people who think, act, behave, and believe the same things they do. They never have to think critically about anything or convince someone else to share their beliefs. People who do that are ill-equipped to deal with the real world where everything doesn’t revolve around them. They can’t even fathom the possibility that maybe they do not know everything, and they can’t see the value in talking to people who have different opinions. So instead of handling this conversation like an adult, he chose to delete everything and pretended like it never happened. I’m thankful I had the forethought to print-screen and save our interaction because I had a feeling he may be the type that would just delete everything as soon as he realized he could no longer defend the indefensible. And that’s exactly what happened. Seconds after I responded to his last comment where he called me a mentally disturbed troll, I got blocked and his half of the discussion got deleted. I knew it was probably going to end that way, but I’m still disappointed in his behavior. He squandered a great opportunity to check his pride, push his ego aside, and grow as a person.  What a shame.