Today I watched a segment on MSNBC’s Morning Joe where one of the show hosts (Mika) started a discussion about the NFL Ray Rice domestic abuse scandal. There were three other guests who took part in this discussion (Donnie Deutsch, an MSNBC contributor whose name I forgot, and a black man named Steve Stout). Mika started off the discussion with a news report saying the NFL decided to not use Rihanna’s song “Run This Town” during their game broadcast on CBS like they planned to do before the Ray Rice scandal broke out. Mika voiced her opinion that because Rihanna was assaulted by her boyfriend years ago and didn’t become a spokesperson for domestic violence, the NFL shouldn’t use her song. I think that’s pretty ridiculous and here are a few reasons why.

1. Rihanna did not choose to get assaulted by Chris Brown.

2. Rihanna’s song “Run This Town” has no controversial lyrics and it does not speak of abuse or violence.

3. Rihanna was the victim in her assault so she has every right to choose not to become a political spokes person for domestic violence. She’s an entertainer who loves to sing and perform. That is what she’s good at and we should not criticize a victim of domestic violence if they don’t want to talk about it, or if they don’t do what you want them to do.

4. The controversial song Mika was talking about was not the song the NFL was going to use, and it was not even Rihanna’s song. It was an Eminem song that featured Rihanna. It’s appalling that Mika would criticize Rihanna, a victim of domestic violence, for lyrics written by Eminem for a song that was Eminem’s. Not once did she say anything about Eminem. She decided to attack Rihanna instead.

5. In the middle of her attack against Rihanna they show a photo of Rihanna’s beaten and bruised face that was taken after her assault. This victim blaming and slut shaming has got to end. Mika should be ashamed for her behavior in that segment. I think she owe’s Rihanna and all abuse victims an apology.

As if all of that wasn’t enough, Mika and the panel decided to connect hip hop with Ray Rice’s abusive behavior towards his wife. This pissed me off almost as much as their unfair treatment of Rihanna. 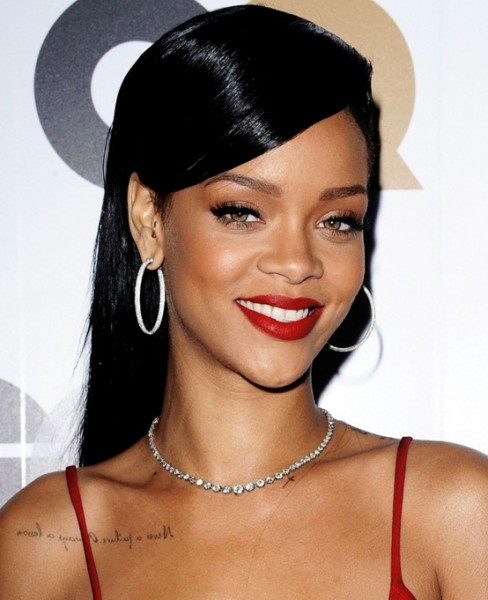 Mika and Donnie Deutsch must think all young black men are connected and controlled by hip hop. Why else would they bring it into a discussion about Ray Rice? Many people who are not fans of hip hop think they know what the genre and the music is about. They think hip hop music is excessively violent, and promotes violence toward women. That is not what the genre or culture is about. Of course there are songs with violent lyrics, and some are derogatory toward women. But that isn’t a significant part of the music. Hip Hop is extremely diverse. There are rappers like Common, Outkast, Nas, The Roots, Black Eyed Peas, etc who are very popular and are known for their socially conscious lyrics. But Mika and Donnie aren’t listeners of the genre so they don’t have a clue. Just like some racist, they see a black man with baggy clothes and dread locks and immediately think criminal, or mistake normal everyday behavior by a black man as aggression. Like the black man who was walking around Wal-Mart talking on his cell phone while playing with a toy gun. The police are called and kill him before he could even explain the gun was a toy. It’s sad that we as black men are all painted with the same negative brush.

While discussing Ray Rice, Donnie Deutsch proclaims he’s going to end hip hop with lyrics he thinks are bad. He says Jay Z is responsible for young black men committing crimes. The music influences them to do it he says. But he has never called for Martin Scorsese or Quentin Tarantino to stop making violent movies. This double standard is unfair and the racial implications are clear. I bet Donnie isn’t even aware that whites purchase more hip hop albums than all other races combined. Inner city crime has ZERO to do with hip hop music. Before silencing artist and trashing their 1st amendment rights, maybe we should do something about the lack of opportunity in those poor black neighborhoods. Maybe we should improve the schools in those neighborhoods. Maybe we should look at the over-policing of those neighborhoods, maybe we should stop giving tax cuts to people like Donnie and Mika and use that money to spark growth in those neighborhoods. Maybe we should stop locking up black people for things that white people get a pass on. They don’t understand that hip hop music reflects the current conditions in the artist neighborhood. Right now it’s the only outlet that gives them a platform to speak to the world. Killing the messenger will only make things worse.

My closing advice to Mika and Donnie,

1. I know young black men may scare you but every thing we do shouldn’t be viewed as aggression. Listen to some of the artist I referred to in my 2nd paragraph. Instead of watching a hip hop video, listen to the song and read the lyrics. That’s the only way you can dissociate the thug cliché you have in your head from the socially conscious artist who wrote the song.

2. Ray Rice is not a rapper. His skin color may throw you off a bit, but trust me. He’s an ex-football player who abuses women and should be in prison right now.

3. Hip Hop culture is not the same thing as black culture.

4. Hip Hop music is entertainment. Just like movies, tv, and other music genre’s, it’s an art form. Your network (MSNBC & NBC) programming depicts a lot more violence than hip hop music does. It’s incredibly hypocritical to chastise Jay Z and hip hop for its violence while being silent about the violence your network makes millions off of.

5. Football is a very violent sport. You praise them for pulling a Rihanna song because some other song she was on with another artist contained a lyric you thought was promoting violence. Your logic makes no sense and once again you’re BLAMING THE VICTIM. Stop it!

I hope my harsh critique adds some much-needed perspective so these mistakes and misrepresentations do not gain credibility. I’m actually a really big fan of Mika and she usually serves as the voice of reason on “Morning Joe”. I want everyone to understand that I am not calling Mika racist. Her misguided commentary definitely seemed out of character, so I won’t hold it against her. We all make mistakes.