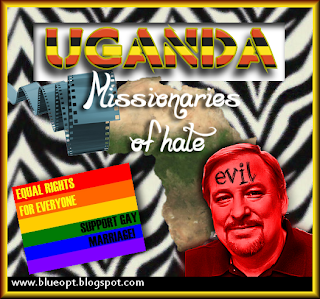 The African country of Uganda joined up with some very prominent AMERICAN Evangelicals (à la Pastor Rick Warren) to draft a piece of legislation in Uganda that would make being homosexual a crime punishable by either life in prison or DEATH. Yes, you heard me right… DEATH! In other words, if I lived in Uganda, and I were in a same sex relationship with a man that I loved, both of us would be arrested and sentenced to DEATH. Can you imagine getting arrested for being in love?  These evil people that claim to be “Christian” are all doing this in the name of God. These American evangelicals have millions of dollars at their disposal donated to fund a huge campaign to fight those who are gay and rob them of their basic civil rights and impose their beliefs on everyone. There are so many problems and ills that plague our society today like poverty, famine, disease, homelessness, poor education, racial genocide, war, etc but instead of using their power and resources to combat some of those issues, they choose to fight the gay community in order to strip them of their rights and in Uganda possibly end their life.  This makes no sense at all. What is “Christian” about that? I really didn’t intend to write all this and shout from my soapbox but things like this really angers me. The real point of this blog post was to get you to watch this 45 minute documentary about Uganda’s “kill the gays” bill and how American Evangelicals played a huge role in the creation of the bill. I’m warning you now that this video is very inflammatory and so ridiculous at times that you just want to laugh from frustration. The most absurd part of it is when the church pastor shows his congregation gay porn during one of his sermons condemning gays. Yep, I kid you not… gay porn on display right in front of the whole congregation, kids included. Just watch it, and let me know what you think. Evil comes in many forms and in this particular documentary the evil is in the pulpit.
Here’s the full documentary “Missionaries Of Hate”