Spoken word artist Crystal Valentine performs a very emotionally charged poem titled “Black Privilege” in a poetry slam competition. One of the most moving lines in her poem tackled the issue of police brutality against black men, and the scourge of gun violence taking way too many young promising lives in urban communities. She says “Black privilege is me having already memorized my nephew’s eulogy, my brother’s eulogy, my father’s eulogy, my unconceived child’s eulogy. Black privilege is me thinking my sister’s name is safe from that list.” Valentine is one of six performing poets who represented NYU at the poetry slam this year. Her team ended up winning which was no surprise to anyone who listened to her performance.

Ms Valentine makes me proud to be part of a resilient culture who takes oppression and intolerance and turns it into extraordinary talent and beautiful artistry. If you’re not moved by her amazing 3 minute video clip, you should contact a doctor immediately because something is seriously wrong with you. She poured her heart out on that stage layering vulnerability on top of confidence on top of self critical introspection. There aren’t many people who can touch your soul with just a few words. That’s power. That’s talent. That’s the power of blackness.

11 Year Old Hangs Himself Because of Bullies Calling Him Gay 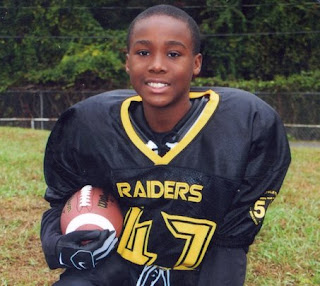 When I first heard this story last night, I got physically ill. I had to turn the tv off because I felt an eruption of emotion waiting to explode up out of me and manifest itself in the form of violence. Words can not describe how horrible all of this is. It made me angry, upset, vengeful, and hurt all at the same time. Anderson Cooper interviewed the boys mother on his show last night. You could see how deep her pain was just by looking at her. As she began to tell the story of what happened, I struggled to choke back tears so I could listen to everything she was saying. When she showed a picture of her son, I looked at him and saw me. We even shared similar upbringings. I immedieatly felt a connection to him. I could probably tell you almost everything going through his mind that led to his suicide. The adults, the teachers, and all other authority figures failed this child. The measure of greatness in a civalized soceity can be measured by how it treats it’s weakest members. Judging from what happened to Carl Joseph, WE ALL FAILED HIM. His mother would be justified if she decides to sue the teachers, the principal, the school, the school board, and the state. Maybe this will finally make people see what intolerance can leads to. The blood of this innocent little 12 year old boy is on the hands of ALL those right-wing evangelical, hate spewing, homophobic, republican, bigots that are teaching their children that it is ok to treat gay’s and lesbians like inferior 2nd class citizens, because they aren’t real people anyway. They might not come out and say it like that, but that’s the message they are sending when they form groups to ban gay marriage, and when they pass laws to keep homosexuals out of the military, and when they preach in their churches about how much God hates gays, and that God is sending all homosexuals to hell. It’s very logical to make that leap in a child’s mind, and because of this, they think it’s ok to commit violent acts, and throw hate speech to gays because according to what they’ve been taught, Gays are evil horrible and damned by God and Jesus. WWJD? Jesus would want us to “discriminate, kill, bully, and get rid of” homosexuals”. … right? I’m only being facioious here to prove my point.
I’m trying to be optimistic about the future of this country, and the fact that we just elected the first African American President has made this a little easier, but when things like this are still going on in 2009, it’s like one step foward, and 2 steps back. When are people going to finally wake up, get wise, and stop spreading their ignorance disguised as “religion”. What ever happened to showing the love of God? Whatever happened to “judge ye not”? What ever happened to “Love thy neighbor”? For some reason, Christians tend to forget about those teachings when it comes to gay and lesbian people. They would rather fight for oppression, instead of learning about tolerance.

I’m just so so so very sad, tired, and depressed about what this beautiful child had to endure. It makes me feel powerless because I am only one man, and it’s going to take a lot more people than just me, to change things. And no matter what I do or say, I can not bring Carl back to his mother and make things better. His pain at school was so great that he thought hanging himself with an extension cord seemed like his only option. How many more children have to die before we open our eyes and open our hearts, and finally get rid of this ugly evil stain on our country known as hate and intolerance.

Here’s some links and video that explains Carls story in more detail: